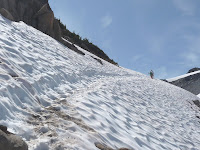 Yet I can’t whine too much about that last 80 feet to Panhandle Gap. The snow at that point was steeper and icier than we were comfortable with; poor run out too. Instead we backtracked to a rocky saddle and watched other hikers cope down-climbing that pitch with trekking poles (does anyone use an ice axe anymore?).

If not for the snow the hike is not all that arduous – about 3,000 feet gain and just under 12 miles. The scenery is well, uh pretty scenic, especially after you cross Fryingpan Creek on a not-so-robust ridge.

From that point it’s a flower show all the way to the moraine. A short, steep climb from the creek to the Summerland shelter (no occupants) – here the trail switchbacks through cliffs mainly composed of wildflowers. Well, you get the idea. Just some of the flowers we saw: avalanche lilies (hanging on in shady areas), magenta paintbrush, western anemone, bistort, Sitka valerian, Veronica and at higher elevations monkey flowers and small ground-hugging plants we weren’t able to identify – lots of heather, both pink and white.

One of the most amazing things about this hike are the colors – the blazing white of Mount Rainier, the moraines (gray, dun, burnt sienna), the almost phony-looking shades of blue and green in melting tarns (perhaps the Creator used Photoshop when he got around to making mountains?). The blue sky which later in the day were broken up a bit by odd cloud forms (no adjectives come to mind), the daubs of primary colors provided by hikers and backpackers on the trail, especially against the dull moraines and the flashy white snow.

Snow that refuses to melt – still a cornice above Panhandle Gap. From our rocky saddle there were some intriguing “trails” that went hither and yon, we suspect to some of the nearby peaks and a couple of trails on the other side of the gap that especially intrigued us. Too bad we didn’t have time to explore those because we had the energy. It was one of those days you felt you could hike forever.

Did I mention the neon, lime-green shades of moss near the stream? Incredibly beautiful. Nestled inside one mound of moss was a perfect arrangement of flowers so tiny we weren’t able to get a decent photo of them. I’m keeping the photo anyway – as a reminder of a beautiful day.

We met some interesting people on the trail – Beth Rossow, who also goes by the name of Bogachiel Betty, currently working on measuring and photographing the Wonderland Trail (she has worked with Bette Filley on Bette’s books on the Wonderland Trail). By the way Bette was at Wapiti Woolies yesterday signing books – wish we’d known, I’d love to meet her.

On the bridge at Fryingpan Creek we met an elderly gentleman with his middle-aged son (gotta be careful with the word “elderly” these days, I’m not a spring chicken). They were also bound for Panhandle Gap.

On our way back we ran into the most laid-back marmot imaginable – he lives in the forest (at least this time of year) between Fryingpan Creek and the shelter at Summerland. He was more interested in eating something under fallen branches than worrying about us – he looked to be on the vintage side and gazed back at us with a “well?” expression.

On our way down we ran into the two men again we’d met earlier and chatted a bit – it turns out the son of the middle aged man (and the grandson of the elder gentleman) was storming up Muir at the same time we were visually grazing on the scenery near Summerland. Today he plans to summit Rainier and tomorrow (Sunday) he plans to run The Wonderland Trail. The whole thing. Oh yeah, forgot to mention that this youth rode his bike to Mount Rainier on his bicycle. Well, that gives one some perspective. The word “awe” comes to mind. I wish we’d asked for his name, maybe you’ve encountered him.