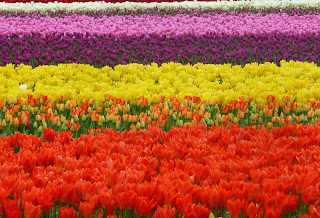 It's going to be a while before the snow melts. A little too long for my comfort - I'm ready for it to be gone.

Hiking has been challenging this "spring" - the snow-free choices are few and many of those are far. A little too far right now with the rising
gas(P)! prices and fewer pennies in the penny jar. We've hiked several times in the Issaquah Alps (Tiger, Cougar Mountain Regional Park), Rattlesnake Ledge, Little Si and the Talus Loop (on Mount Si) and earlier in the year Kamikaze Falls. Also Snoquera Falls off SR 410 (there's been a landslide and/or rockfall on the trail just before you reach the falls - perhaps that's been fixed by now).

Where to go? Cowiche Canyon Conservancy (Yakima) is a good choice despite the long drive. Flowers are out, it's warm, sunny - at least warmer and sunnier than it is in Seattle. We've been to Lime Kiln recently (I co-led a Mountaineers hike) and it was a cool, cloudy day though it felt like it would rain any minute. That's OK though because it should be at least threatening rain when you hike the Lime Kiln Trail - just to get the historical ambience of the place. Heard somewhere that the Lime Kiln is "listing" but it looked fine to me. There's a washout not too far in above the river - it's not a place you'd die if you fell but you'd sure get muddy. Children might need help crossing this spot; otherwise it's manageable. That being said, I wouldn't cross that in a downpour.

The Blanchard Mountain Trail System is another year-round "goodie" - we've been to Oyster Dome and also Lily/Lizard Lakes (from the upper trailhead accessed from the Alger Exit on I-5 north). Signs of spring there too.

Even though Rattlesnake Ledge is always jumpin' on even a half-way decent day we went there on such a day but didn't mind the company. Most of us are getting stir-crazy and Rattlesnake Ledge is big enough to share with the crowds. We did meet crowds coming and going but the sun was shining and everyone was happy. That was about 10 days ago.

Today we did a hike at Cougar Mountain Regional Park but cut it short when it started to snow. I hike with an umbrella on days like these and by the time we were back at the car the umbrella had grown heavy with the weight of the snow. By now it's probably melted ... but jeepers, should it be snowing on Cougar Mountain THIS time of year? Again?

When all else fails ... head up to the Skagit Valley on a weekday (get an early start) and enjoy the tulips/daffodils. I call it the "miracle cure" for those of us with SAD.

These are desperate times 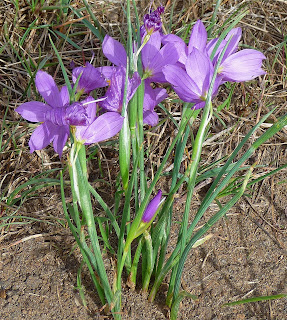 There's a topic on a hiking website with the subject like something like .... this weather blows!! I could add more "descriptive" words to describe this dismal state but that might be best left to your imagination.

This is the worst spring that I can recall since the early 1990s - then, on a backpack in the Olympics, spring flowers were popping up right next to the late summer flowers. There was still a lot of snow in the high country that year - Labor Day weekend. This year threatens to be like that one when it comes to hiking in the high country (sans traction devices/snowshoes). When will we get there??

Meanwhile .... the cost of gas, the weather and the snowy conditions are keeping us closer to home. We raid the penny jar for anything further away than North Bend or Enumclaw. My boots are falling apart and need to be replaced - that's on hold for a while too. That being said I keep hiking anyway - even in the snow. I can always dry off later.

Let's see .... I've been seeing more of Tiger Mountain and Cougar Mountain than I'd prefer lately but these hikes help keep me in shape. Little Si and the Boulder Garden trail also come in handy. I also like the Talus Loop on Mount Si.

We've been to Lily and Lizard Lake (from the upper trailhead) and managed to eke out about 1,600 feet and a little over 9 miles. That was about 10 days ago and it's starting to look like spring up there. And high time too! I bet the Blanchard Hill trail system is going to get a lot of business this spring -- aren't you glad it's there? I sure am. It's a long drive to the Alger exit off I-5 but these are desperate times. Desperate times.

Friends who have more pennies in their change jar have saved the day more than once -- a couple of snowshoe trips down to Mount Rainier a few months ago and a few days ago, a long, lazy, colorful day in the Skagit Valley - we couldn't have timed that better. The daffodils were still holding on nicely and the tulips are at peak (and still more to peak). The fields are muddy but that's what we wear old tennis shoes for. Not a problem.

Another incredible treat was Cowiche Canyon Preserve in Yakima - that was a couple weeks ago and it definitely felt (and looked) like spring that day. Again, a long drive but these are desperate times. As of a couple weeks ago there were grass widows, yellow bells, lomatiums, desert parsley and a few other early bloomers braving the elements. This should be a flower "hot spot" as of this writing. In addition to the flowers are the incredible colors of the canyon the trail runs through -- it's an old railroad grade. Parts of the trail squeeze between walls of columnar basalt in an array of earth-tones and striations. After the fact learned that the faces we saw in the rocks we thought resembled the faces of Easter Island are named that in the brochure (we didn't have the brochure). This is a great family hike too and a new trail has been added (at least new to me), the Winery Trail. That's a 3/4-mile trail that climbs to a winery where you can taste wine if so inclined. There's also the Uplands Trail (that was where most of the flowers were) and there are at least a couple other trailheads than the main one.

We'd planned a trip to Mount Rainier yesterday despite the expense but the weather looked pretty disagreeable down there. If we're going to make the trip down there we want at least a half-way decent day. Instead -- the Bellevue Botanical Garden saved the day (though the flowers are out, it still felt like winter).

Today we went to Cougar Mountain intending to go to my favorite spot -- Far Country Falls. Started from Red Town - were going to stop at Coal Creek Falls but apparently that approach is closed - a sign informs hikers that the bridge is damaged. Hiked to the Big Sky trailhead and intended to get to the Far Country but the pallid sun that teased us earlier in the day disappeared and it began to rain. We called the trip short and high-tailed it back to the trailhead as it rained, snowed and sleeted on us. The snow was sticking to the few cars that were in the Red Town parking lot.

I've taken up running - not only to keep my sanity while I wait for the snow to melt but to keep the pounds from creeping back as they have a tendency to do this time of year.