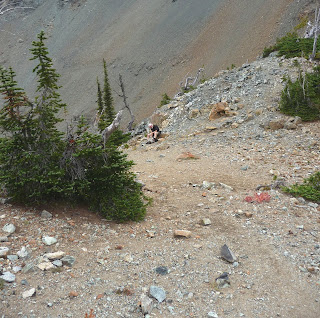 Yesterday felt like a genuine fall hike. Was it really only a few days ago that we were basking in the sun at Mount Rainier?

Since the weather was "iffy" we thought the Teanaway would be a better place to hike than on the west side of the pass.

Long's Pass sounded good - I hadn't been there for several years and even dared hope there might be a little bit of gold in those larch trees around Lake Ann.

It had rained the night before and the vegetation was wet along the trail - the blueberry shrubs have turned crimson and the meadows golden and shaggy. There are still quite a few flowers in bloom including scarlet gilia, Indian Paintbrush, harebells, pearly everlasting and asters.

As we lunched at the saddle I pointed out Fortune Peak to my companion and pointed out the scramble route to South Ingalls (if you can follow the scramble trail to South Ingalls you can hike out on the Lake Ingalls trail for a nice loop). However, I recall there's quite a bit of elevation gain and it makes for a long day. But fun! We considered that but with a late start and impending rain we ended up turning around instead.

Sure enough, almost as soon as we turned around it began to rain and rather hard. As we raced down the trail the rain was driven by wind until we were out of the open areas and into the protection of trees.

With the new rain the whole place was jumping with color! It was absolutely gorgeous!! No complaints at all except I don't think summer lasts long enough.

To those who have written comments to which I have not replied ... I am sorry. I did not realize they were accumulating on another page and thought I wasn't getting any comments. Now that I realize my mistake I'll do my best to catch up and reply to those who have asked questions. The ins and outs of blogging are not all that clear to me other than posting text and photos, please excuse my ignorance.

Karen
Posted by karen at 7:57 PM No comments:

Well, I'm still not caught up. I'm still doing more hiking than writing but now that the rains are returning, I'll have more time to fill in some of the blanks. I do hike year-round though I am reluctant to admit that much of the "good" hikes are going away as the days grow short and bad weather returns. I'll hike anyway and will always do my best to find places to write about and photograph.

Here are a few of the hikes I've done in the past month or so, with the most recent being yesterday's hike to Lake Ann in the Teanaway.

There may be some "edits" to this list and/or additions.