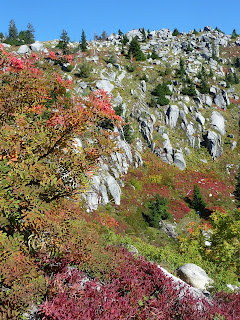 We have a love/hate relationship with the Granite Mountain Trail. It’s a hard hike for many with significant elevation gain and mileage; the reward for the toil is worth it for hikers who stick to it. Those who have hiked to Granite Mountain and the Granite Mountain lookout on a regular basis get to know each switchback by name (we’ve never counted them) and after several trips over the years we look for the tree that designates the beginning of the Alpine Lakes Wilderness.

Our hike yesterday (10-17) was no exception though the weather was exceptionally good for mid-October. Though it was cool in the shade when we started by the time we were out of the forest and onto the open slopes of Granite Mountain the sun was warm and the fall colors so intense it looked like the mountain was on fire.

The first stretch of the trail – as many trails in the Pacific Northwest – starts out in forest but this is old forest, quiet and deep. When you get to the junction for Pratt Lake/Granite Mountain go straight uphill – you’d turn left if you were heading to Pratt Lake.

Still in the forest the trail continues its intense climb and eventually enters the Alpine Lakes Wilderness (designated by a sign). The foliage thins out a bit and there are a few peeks ahead to blue sky and swatches of fall color.

Views improve every step of the way – this is high country at its finest with views down to I-90 and McClellan Butte resembling a great bird with its wings spread about to soar. The trail continues through the Halloween candy colors of fall – the blueberry shrubs were turning red; some still held bountiful berries. The beargrass that lined the trail earlier in the season has lost it’s white plume of a flower but the ragged, skeletal stalks remain amidst bright pockets of mountain ash, hanging meadows with occasional white snags and then looking very far away – the lookout comes into view.

The climbing relents as the trail approaches two small tarns in a meadow; the fall colors above the tarns were reflected in the water. The tarns are the ideal spot for a break before girding yourself for a still-steep ascent.

From the tarns the trail spurts upward again then winds more gently through large boulders and meadows. The lookout appears again, still looking very far away though it’s closer than it looks.

The trail relents again and is level for a bit before one more steep push through forest to a boulder field; then suddenly you are there. The lookout is closed for the season but there are plenty of places to settle and the views will take what breath remains away.

First we stopped for lunch at the lookout; where it was warm and sunny enough that a chipmunk popped up from the rocks and dashed about hoping for handouts. From there we enjoyed views of Mount Rainier amidst a sea of undulating ridges and Mount Adams further to the south.

Two companions opted to hike the trail back to the tarns; three of us opted for the scramble route on boulders to the tarns where we’d rendezvous. The scramble is not particularly dangerous though good balance and some off-trail hiking experience comes in handy. Later in the year when snow falls, the scramble route over the boulders becomes hazardous as snow fills in crevices between the rocks and it’s all too easy to twist an ankle or worse.

We suggest you hike this trail soon – once significant snow accumulates the trail becomes dangerous in the open areas and avalanches can roar down without warning.
However, with a dusting of snow the hike can still be done and is spectacular then, especially when there is still fall color (watch for ice as temperatures drop).

As always never hike beyond your comfort level and always tell someone where you are hiking and when you are expected to return.